Emotional Intelligence as the alignment of the three brains

The interconnectedness of mind, body and soul

This article discusses how the latest neurological discoveries can influence, inform and change our way of looking at, understanding and relating to our emotions and emotional intelligence.

Research on how the human body and mind function dates back to the beginning of humankind. Philosophers, scientists and others have always felt the need to find an explanation for the way things are in our universe. This is confirmed by the presence of ancient records, whether as manuscripts, drawings, or archaeological finds. This discussion on how the human body and mind function has, however, been rapidly accelerated by the advent of technology, in particular the capacity of new machines to process large quantities of data and to investigate how the brain functions with more clarity and evidence. This reference to the brain is significant because, particularly in Western cultures, there can often be an artificial separation created between mind and body that prioritises the brain over the other parts of the body. Current neuro-scientific research shows, however, that there is a strong connection between mind and body that cannot be severed. In other words, the unity of the body and the mind has now been scientifically proven.
Numerous researchers and scientists contributed to this discovery. Candace Pert was the first neuroscientist to study and identify neural connections outside the brain, achieving notable results as early as the 70s. She researched how certain chemical compounds reacted with the brain, finding that the same chemical compounds, which had previously been considered to be present only in the brain, were also present in other parts of the human body. This opened up a new strand of research, which aimed at identifying a full map of the receptors scattered around the body, a project that is yet to be completed. Her research has revealed how the chemicals produced by the human body, e.g. neuropeptides and their receptors, are the biological base of consciousness, manifesting themselves as emotions, beliefs and expectations, and profoundly influencing the way in which we react with and perceive the world. Candace Pert brought a new way of looking at what happens to human beings by finding evidence that the body knows what is happening before the mind, and that everything in our bodies starts with a chemical reaction, even thoughts and emotions, which had previously been attributed to external influences.
The results of her research were published in her book ‘Molecules of emotions’, and are easy to read even for those new to the natural sciences.
The HeartMath Institute in California has been studying heart function in parallel to this for the past 25 years and has developed cardiac coherence techniques that help align thoughts and emotions, resonate them and then resonate these with others. The scientists working at the HeartMath Institute have found clear evidence that the heart also acts as a brain and that it possesses all the functions that are normally associated with brain function. It has found that the neural connections in the area around the heart send more signals to the brain located in our head than the signals sent by the encephalic brain to the heart. As a result of these studies, the HeartMath Institute has created a model called cardiac coherence to facilitate the alignment of the cardiac brain with the head brain. When we are not resonant with ourselves, we find ourselves in a state of un-wellness and we send conflicting signals to others because we are unable to resonate with them.
In 2014 Rebecca Linder Hintze published her book ‘Essentially Happy’ containing the results of a study she conducted in collaboration with the School of Psychology at the University of East London in England. The study explored the effect of essential oils and good nutrients on emotions. It revealed the centrality of the gut in the activation of emotions and reinforced the need to maintain a chemical perspective on the creation of emotions and the ways in which they can influence well-being. One aspect worth mentioning here is that 90% of serotonin, the hormone of happiness, is produced in the intestine, which is why eating has an uplifting effect on our mood and why depression is connected to poor nutrition and the resulting lack of minerals, vitamins and enzymes necessary for the proper performance of vital functions. The study also revealed the important connection between depressing emotions and the inability to act.

These 3 brains communicate with each other through molecules that carry information and which have the ability to react with each other and to influence our behaviour, thoughts and emotions.
Based on these statements, it is clear that emotional intelligence is much more than dealing with emotions. In particular, it shows that emotions are not something that we receive from the outside, nor are we able to manage the emotions that we used to think came from outside of us. The same applies to the emotions of others.
If everything is the result of a series of chemical reactions in our body, then the correct definition of emotional intelligence is the ability to align and bring into coherence our three brains. Focusing on only one brain is insufficient, given the interconnected communication within our body.

In our daily life we are confronted with situations and tasks that we repeat as part of our daily routine. This spans from waking up to going to bed and everything in between. Some of these actions are repeated almost automatically and each of them has a role, a place and a time. When we are able to do what we wish with the resources, spaces and time available, we are in a state of well-being. This means that there is balanced connection between what we desire, what the world is asking us to do and what we are able to do. When there is a dissonance between what we wish and what we are doing because of an external request, then the situation of dis-alignment starts.
Let’s take an example: I like to spend time with my partner, I like to do my job, I like to show an interest in others and be socially active. When there is sufficient time and space for each of these then there is no problem. When these desires start to conflict with each other, they give raise to unwanted emotions like anger or frustration. There may also be physical pain and a sense of limitation as thoughts arise that constrict actions and development.
Imagine being in a conflicting situation: you have an important deadline to meet at work, you’re late for a meeting with your loved one, and as you try to hurry up you spill coffee on your phone and your documents so you can no longer phone or use your documents.
Which kind of thoughts, emotions and physical sensations do you now feel?
What happens if the same situation or a similar situation happens to you a number of times in a row? What happens if these same emotions are consolidated by your experiences and are memorised by your brain? You are starting to set the basis for a new mindset that will influence and impact all your future actions. Every action creates memories for the future, according to Antonio Damasio, one the most famous neurobiologists still alive. 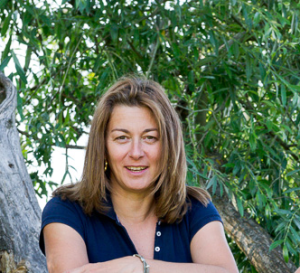 For the past 20 years I have been fascinated with strengthening people and organisations throughout Europe in liminal phases to learn from and for the future with creativity and in harmony with their inner call. At the centre of my methodological approach is above all mindfulness, Otto Scharmer’s “Theory U”, embodiment practices and the healing power of nature and essential oils. Born in Italy, I have lived and worked in many countries. I am currently living in Austria and serving as the president of alp and co-founder of LIMINA and emotion-wise network.

I am certified as an emotions mentor and with AromaTouch, MBSR, Mindful Self-compassion and Mindfulness in Education (with school, teachers and parents), Social Presencing Theater of Arawana Hayashi.