How we experience music and how the brain processes it

This article does not answer the question of whether music causes emotions since this is relatively undisputed. It explains instead how we experience music and how the brain processes it.

“The fact that music has a special effect on our emotional world is clear and almost trivial for everyone. Almost every event is initiated and accompanied by music. One is emotionally harmonised by music and put in the same mood with the listeners. Through suitable music, one can calm oneself and others, stimulate oneself, create joy or make oneself aggressive.”

Music has always been a part of human culture and can be found in every known civilisation, both past and present. Music is strongly influenced by the culture of a region or country and by the time period it was created in. The societal function of music and the emotions it created vary considerably between regions and time periods. It is most likely that the first instrument was the human voice. The oldest musical instrument found is a flute, which is estimated to be about 35,000 years old.

Music has a lot of power. Music is deliberately used in advertising to create emotions that lead to a purchase. In one experiment, “test persons were shown a picture of a light blue or a beige pen while at the same time music was played that the participants liked or disliked. After the test the participants were allowed to choose a pen (either light blue or beige) as a thank you for their participation in the experiment. By varying the music and colours, it could be shown that the test person selected in 79% of the cases the pen whose image they had previously seen while listening to their favourite music. The music influenced the choice.” This experiment shows how powerful music is and how it can unconsciously influence our decision-making, especially when we are in shops and supermarkets but also when we come across advertising.

Unfortunately, it is not always easy to predict the influence of music, because it is experienced emotionally in different ways. Lutz differentiates between learned preferences and biological given reactions.

In the second case, biological given reactions, our brain is programmed to identify specific acoustic stimuli quickly and accurately. Typical stimuli that trigger defence and escape reactions in humans are, for example. loud noises, bangs, hollow, low notes or dissonant sounds. Stimuli which trigger positive reactions are, for example. regular patterns, medium volume range, slow starting and changing stimuli and consonant sounds. There is no way to escape the impact of these sounds in a first instance. Taking time to observe and understand the situation can help us to overcome our initial reaction.

Learned preferences are about experiences. We like what we hear often. This was demonstrated in 1903 by the social psychologist Meyer, who rehearsed different styles of music repeatedly and found that music played more frequently was rated more positively than that which was played only once. This has been demonstrated for different styles of music, including jazz, tonal and atonal classical music, Korean and Pakistani music, and even random sequences of notes.

This means that the emotional power of music is highly dependent on past experience. “For citizens educated in Western cultures some sounds from Asian or Arabic countries seem foreign and often provoke reserve or even aversion, while for Arabs and Asians the same music triggers the highest ecstasy. […] This does not mean that citizens of other cultures cannot appreciate the music of other cultural groups, but it requires intense experience with this type of music.”

In addition to experience, emotional reactions in music also vary considerably between people or even one and the same person. There are various reasons for this, which include the listener’s current mood, their personality, other activities conducted alongside listening to music, cultural and personal fluctuations.

“However, research on the emotional responses to music has also shown that certain characteristics of the music itself can evoke emotions. Even if music does not recall anything in particular, and if it does not imitate anything specific, it can evoke emotions.” Musical highlights, a certain harmonic or melodic sequence or a new or unprepared harmony can cause physical reactions, such as tears, goose bumps or an increased heart rate. One can experience this regularly in films, which music is used to arouse heightened emotions in a love scene or a dangerous situation. Music also has the power to heal and is being used more and more in medicine, for example to reduce stress after chemotherapy or to restore speech after a stroke.

Music activates a network in the brain

Neuropsychologist Lutz Jäncke states that when listening to emotional music, the limbic system is activated strongly. He defines the limbic system as a combination of different brain structures that are central to processing emotions.

“During music perception, the individual music stimuli are processed at different levels. Within the first 900 milliseconds after stimulus, elementary (pitch, timbre, intensity, etc.) but also complex characteristics of the music (melody, rhythm) and their mental processing results (semantics and memory) are noticed. At each stage of processing there are links to many other areas, in particular to movement but also to speech. Many brain areas are responsible for the perception of music. Interestingly, these brain areas are not only involved in the processing of music, but also in many other functions. Therefore, one cannot identify a typical area for the recognition of music in the human brain. Today, we’re talking about a network for music perception. ”

Example: In one study (Blood and Zatorre, 2001), 10 people listened to pieces of music that caused “goose bumps” while, among others things, the cerebral blood flow of these participants were measured. While listening to this music, the heart rate, muscle tone and breathing depth increased as expected. It was interesting, however, that the circulation in the brain areas, which is of central importance for the control of motivation and excitement, also increased. (The ventral striatum, the orbital frontal cortex, the ventromedial prefrontal cortex, and the island area).
These are the areas of the brain that are also active in many other situations where extremely pleasant emotions prevail. An example of this is an orgasm, when a drug addict takes drugs, when one wins something or looks at the image of a beautiful woman, etc. This shows again the power of music to create intensive moments of well-being and happiness, and to prompt the healing and transformation of our brains.

What does that mean for leadership? As a leader, it is important to be aware of the emotional impact of music. Music can trigger deep emotions. As an individual, one can use music to put oneself in certain moods, to activate oneself, to be happy or thoughtful or to calm oneself down. Music can support personal well-being and accelerate healing processes.

Music can also be used for its emotional impact. One can use energising music to accompany creative processes in order to inspire team planning. This music could also help one to get up in the morning, for example, while after work relaxing and softer music might be preferred. Lutz also describes seasonal variations for music. In the autumn and winter, reflective music, which also demands the sentimental-associative listening habit, is preferred. One thinks about the past year, about life in general or about specific life events. 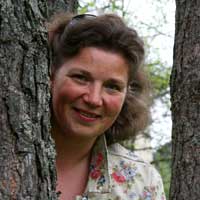 Communication is my strength, key to which is active listening and asking the right questions at the right time. I have 20 years of professional experience at an international level in several non-profit organisations from Africa to Eastern Europe, as well as several years’ experience abroad, all of which has sharpened my intercultural senses.
As a coach, trainer, facilitator and consultant I support individuals, teams and organisations in their development. My current focus is on inclusive leadership and emotional intelligence, specifically on allowing our bodies to help us find the right path. I hold a master’s degree in communication, a degree in mediation and a master’s degree in systemic coaching and organisational development