2 years project in the streets of Europe 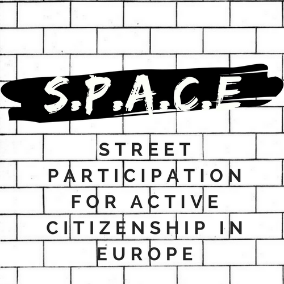 The 2013 Eurobarometer (European’s Engagement in Participatory Democracy) was highlighting the need to strengthen active citizenship in Europe. Our democracy model based on representation is in a moment of crisis and most European citizens do not trust the political class any longer. As consequences, many citizens do not participate in public life – for instance he last EU Elections in 2014 had the lowest voter turnout – or express their views and opinions on European issues – more than two-thirds of Europeans (67%) say that their voice does not count in the EU – and a large part of the population is out of the democratic life and do not use well their citizen’s right and the existing European tools of participation (EU Elections and petitions, citizens’ dialogue, citizens’ initiatives, Volunteering, Debating Europe, Consultations and Feedbacks).

On one hand, for the citizens of Europe, there are few accessible spaces for citizen’s expression and initiatives and the European democratic debate do not integrate and valorise a real plurality of views. In the other hand, Local Authorities and Civil Society Organizations have difficulties to reach the citizens to facilitate their participation and they need innovative methods to communicate and inform the citizens about and promote EU tools of participation.

To challenge these citizen’s participation issues, a Network of Towns (Local Authorities and Civil Society Organisations) from 11 EU countries + Neighboring Countries, usually involved in local democracy, thanks to the 24 months project “S.P.A.C.E.”, will bring and carry the European debate in the street, closer to their disadvantaged citizens.

This project will improve conditions for civic and democratic participation at EU level and encourage democratic participation. Through some innovative methods of social interaction in the public space, 22 participants will become “Street Facilitators” and after being adequately trained, they will act as multipliers of “Street Debate”. During some local events, these Street Facilitators will organize some ‘Porteurs de paroles”, a street workshop that permit a large participation of the citizens. All the views and opinions expressed will be carried in a European dimension and citizen’s voices will be valorised and brought up to the decision makers’ level. Thanks to this grass-root stimulation of democracy, the participants will also create some innovative tools to inform in the street the citizens about the existing European tools of participation. The project “S.P.A.C.E.” will enhance from the street the debate about the future of Europe, and will permit to the network of towns to have a long-term impact on the on the partner communities and at EU level, thanks to the tools, methods and to the dissemination tools produced (a guide and other deliverables).

This project has been funded with support from the European Commission.

This communication reflects the views only of the author, and the Commission cannot be held responsible for any use which may be made of the information contained therein.